From the Scottish Highlands to the English Channel

In the morning we left beautiful Glen Coe, but we were still treated the entire day with more nice scenery. We drove up to Fort Williams where we found a library that allowed guest internet access for 30 minutes. Since this wasn’t nearly enough time, we were happy to find a cool outdoor supply store just across the street that had free wi-fi. Ben Nevis, the highest mountain in Britain (just over 1,300 meters) is located nearby Fort Williams, so I’m sure this store gets plenty of traffic from outdoor enthusiasts. After our break, we continued our day’s journey, this time in search of the infamous Loch Ness monster. We stopped briefly in the town Fort Augustus which is at the southern tip of Loch Ness to see if we could spot Nessie, but since it was chilly and gray, we were told by the locals that our chances of spotting her would be slim. They were right, but it was nice to stop and admire the loch. 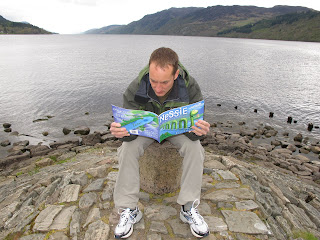 The rest of the day was spent driving. We passed moor after moor covered in heather. At this time of year, the heather was brown, but I can just imagine how lovely it would be in the autumn when it blooms and all you would be able to see for miles would be fields of purple. Instead of purple, we saw lots of golden yellow flowers called “broom” which grows on a thorny bush (maybe so the sheep don’t eat it!). 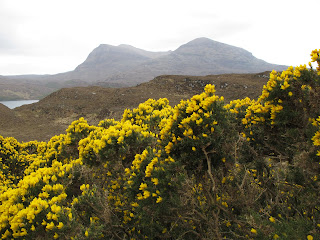 At the end of the day, we reached the town of Ullapool, where we found a perfect camping spot at Broomfield Campground right on the edge of Loch Brown which opens into the Atlantic Ocean. Because we were pretty far north, it was still light out at 10:30pm! 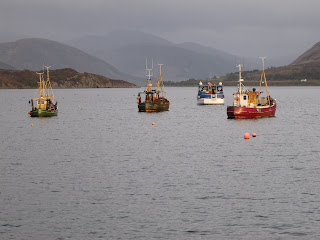 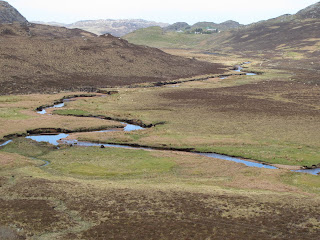 This was a driving day, but not just any ordinary driving day…we got to drive along the west and north coast of the Scottish Highlands. Before coming to Scotland, it was one of the places we were looking forward to visiting. From Ullapool on the west to Dunnit Head on the far east, we drove along a road that followed cliffs, mountains and fjords. The road in spots was just a single road with two way traffic and a small section that you could pull over if there was oncoming traffic. We took a small road to Dunnit Head which is the northern most tip of Britain. We drove south from here and stayed at a youth hostel overnight in a town called Newtonmore. 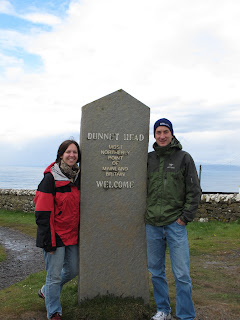 We drove all day from Newtonmore to Folkstone, where we were going to take the Chunnel to Calais France the next morning. We camped at a nice campground that had a great view of the English Channel. It was neat to be able to look across and see our next destination, France.
Posted by Kirstin at 6:22 AM